This 10 3/4" x 10 3/4" Forrest Fenn Comemorative Treasure Chest are individually numbered and limited to 100 to be produced.  Poured as a solid cast, they come complete with hardwood lining as well as a lock and key.

Created by Chris Jones, these treasure chests are solid bronze weighing in at 42lbs once complete. Each chest receives an antiquing treatment giving it an aged appearance as a treasure chest should be.  As they are made to order, the desired patina can be selected at the time of purchase.

Bronze needs little help to stand the test of time as it is a 100% Non-Ferrous metal meaning it is immune to moisture.  However, these chests were designed to have a 1/4" solid bronze wall, floor, and lid before the the dimensions of their carvings ensuring they will last an eternity.

Each chest is individually numbered and made to order.  Below, find a list of the numbers available: 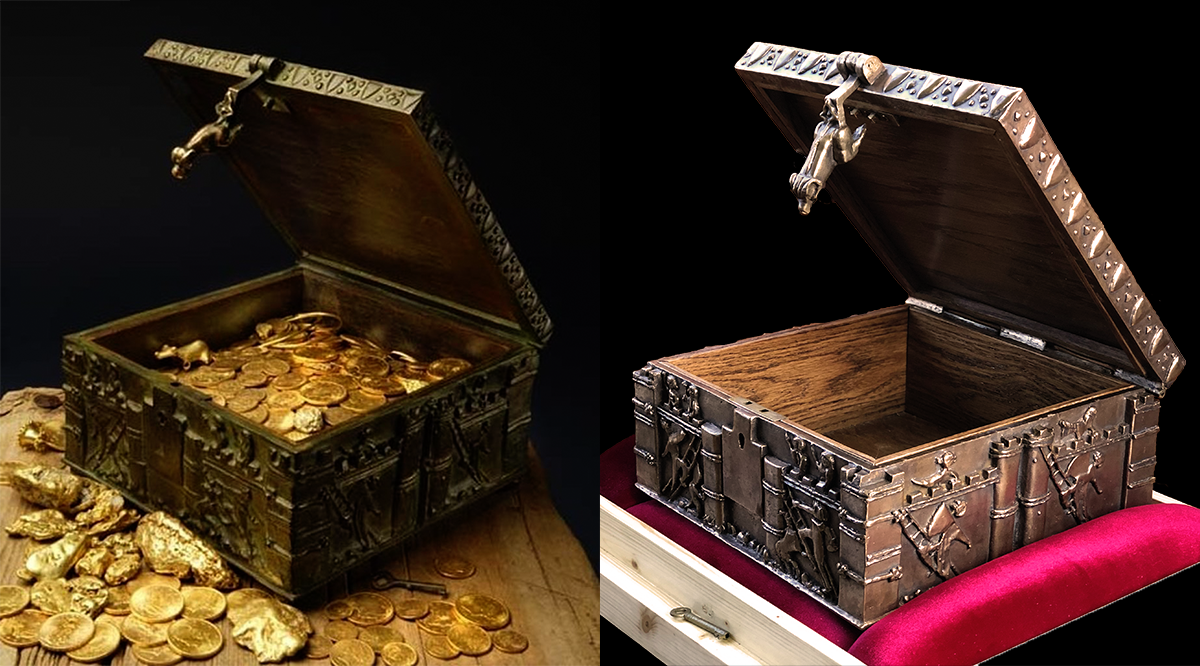 The treasure chest was designed from an illustration of a Bronze Casket from the 11th or 12th century.  These chests are and will be the only official hand crafted renditions of the original.

All wall widths and figures were scaled to size for proportional accuracy. In order to achieve the desired  weight of 42lbs, the figures were created more pronounced adding weight to the piece. This was achieved by using a 8.4/1 ratio.

For authenticity purposes, the project called for it to be completely hand carved as it would have been in the 11th or 12th century.  Once the wax mold was complete, a master mold was created that would allow the base and lid to be poured in solid pieces.

From Wax to Bronze

When pouring a five dimensional object, special attention has to be given to the gate sizes for the metal to get in as well as proper venting to allow the metal to reach its destination.  This purposed additional challenges as there were limited places to attach the sprue(s).

Once this was remedied, the shell process could begin.  For days the bronze treasure chest is dipped into solution and sand until there is a wall thick enough to with stand the violent abuse of 2000 degree metal.

The base and lid of the chest were then poured and you could see the final product in an indestructible form as the shell gets busted off the bronze treasure chest.  Its is then cleaned and prepared for assembly.

Unlike most bronze sculptures, this project called for moving parts and assembly.  A proper hinge had to be created that looked like the original but could hold more weight.  Once the feet were attached, the two pieces were joined along with its lock.

The interior lining needed to be White Oak and milled down to the original's size, 1/4" thick.  Not only did it need to be stained, but also needed a deep polyurethane treatment as the original was designed to set outside and with stand the elements.

Once all the interior trim was installed, the chest was complete.  It was a true honor to be trusted with this project.

•To place an order or inquire about a specific number, email us at contact@vinnettis.com